You are currently browsing the monthly archive for February 2011.

Luca celebrated his first birthday a couple weekends ago. We can’t believe it has been a year already. I remember wondering when I was little why grown ups were always complaining about how fast time passed. All I knew was that it took forever for my birthday to come around each year. Now I really know what they meant. It feels like it has only been a few short months since he was born – I still remember every detail about that day! But it has in fact been much longer than that, and our little monkey has grown by leaps and bounds, and has learned an incredible amount about the world around him. I think he has also taught us an equal amount about our world that we never knew before. One thing he didn’t know about before his birthday party was a wonderful thing called chocolate cake (see pics below). Happy birthday Luca, we love you! 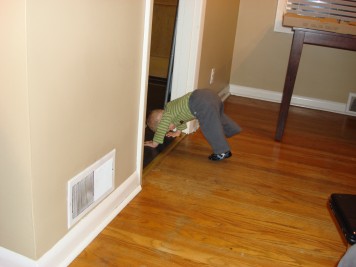 Luca warms up for the party with a little downward dog action. 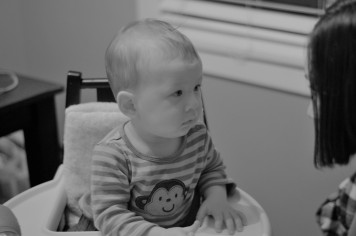 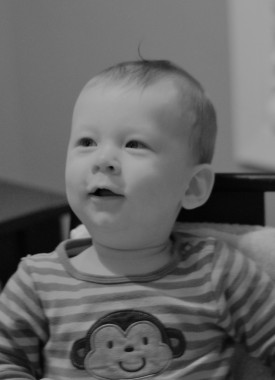 OK everyone, let's get this party started! 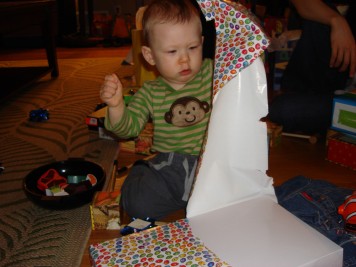 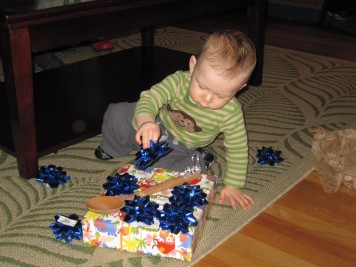 So many bows to pull off of this present! 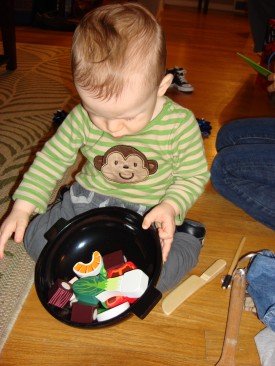 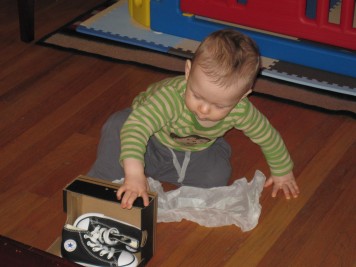 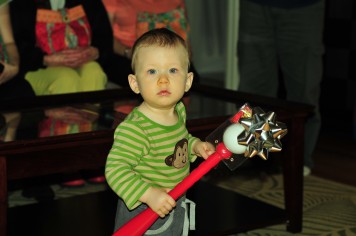 This red baseball bat was certainly a favorite. He carried it around for the rest of the day. 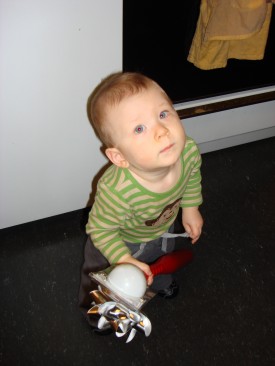 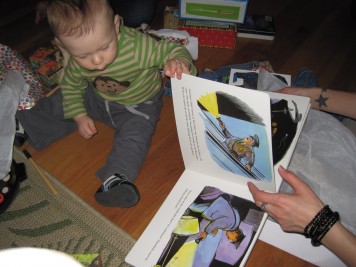 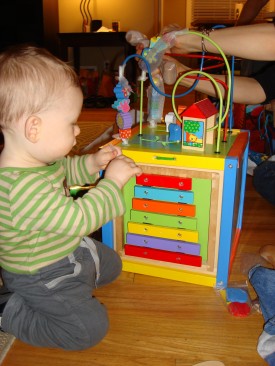 Well, I better rip off the styrofoam into tiny pieces first. 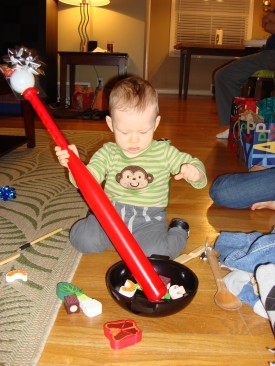 Hmm, I wonder if I can cook my stir fry with this bat... 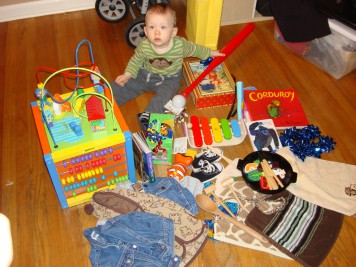 Posing with all his gifts. 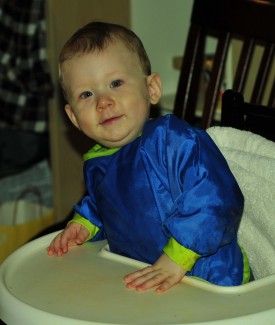 All ready for his cake. 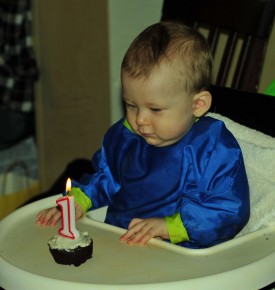 My grandma had been telling me about my mom on her first birthday, and how she would carefully reach for the candle flame but then draw her hand back. So I set Luca's candle in front of him, expecting him to do the same. He of course immediately reached out and tried to grab it. Luckily my hand was just a little bit faster than his. 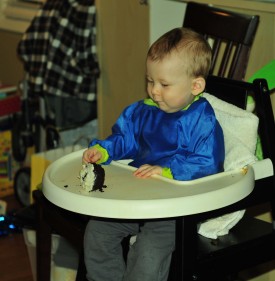 Hmm, what is this cake all about? 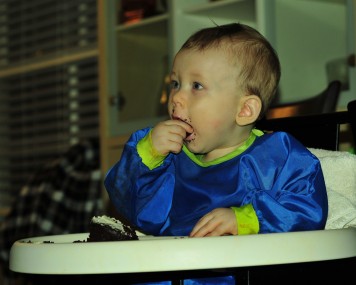 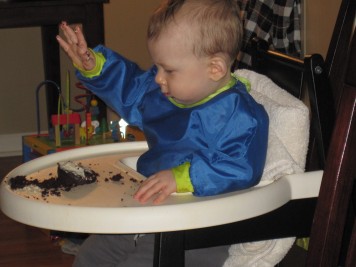 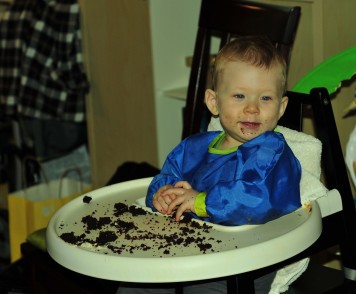 Mmm, that was delicious. 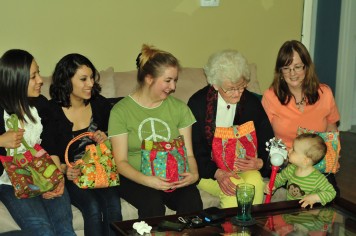 What's this? Everyone's posing for a picture with their cute purses? Well I better just squeeze in here and see what's going on. Excuse me, pardon me... 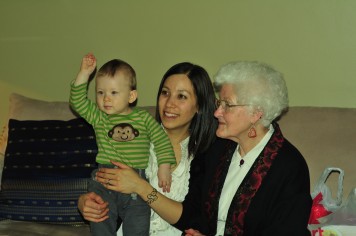 Thanks for coming to my party, everyone!

When you play hard, you’ve no choice but to sleep hard. And with play time as fast-paced and energetic as Luca’s is these days, it’s no wonder he drops off into dreamland without much regard for blankets, crib rails, corners, etc. 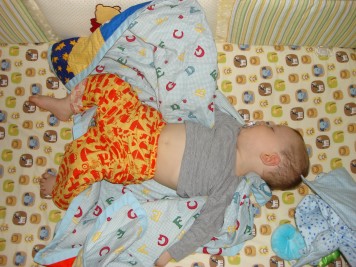 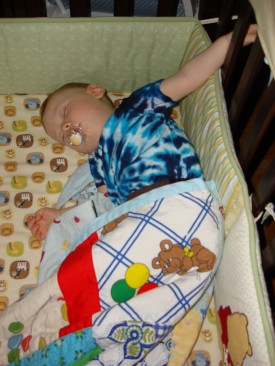 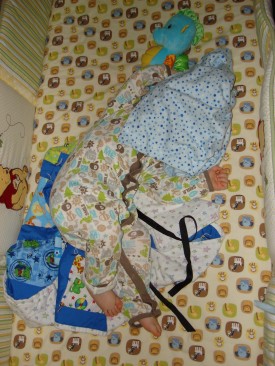 You’ll notice a few things in this last photo. This was a particularly difficult nap time, and since he just wouldn’t calm down and settle in I left him in his crib and closed the door. When we came back to check on him a little later, this is what we found.

The most obvious is that his face is completely covered by his lovey (a lovey is any object that provides a sense of comfort, like a security blanket. I made this little doll/blankie version for him and we use it to help him wind down for bedtime).  Often times when he pulls his blanket up to his face it triggers that last bit of transition from awake land to sleep land. Since the blanket was stuck underneath him and he couldn’t pull it up, it looks as though he had to use the lovey this time instead.

Secondly, you can see that he is almost on top of his musical sea horse. It plays soothing songs and gentle water sounds when you squeeze its belly. It normally lives tucked away in the far corner of his crib, so apparently it came out at some point to join in on the action.

And finally, you may notice a couple black ribbons thrown into the mix. Those can normally be found tied around some padding we put over the edges of the crib, to prevent little sharp teeth from chewing up the wood (click here to see previous post on this topic).

So it’s clear some kind of battle took place after I closed the door, and we’re not sure who the victor was. The monkey? The lovey? I guess in the end it would have to be Mr. Sandman who claimed the final victory, hard fought though the battle may have been.