I had the last two weeks off and along with Christmas I got to catch up on a lot of little projects around the house. After cleaning, organizing, installing new switches and outlets, weatherizing, and upgrading our wi-fi I finally got around to decorating Autumn’s room with Kitty.  I had some ideas and had been looking forward to it for awhile.  Along with some hand made gifts her room is much more fun now.

Autumn checks it out 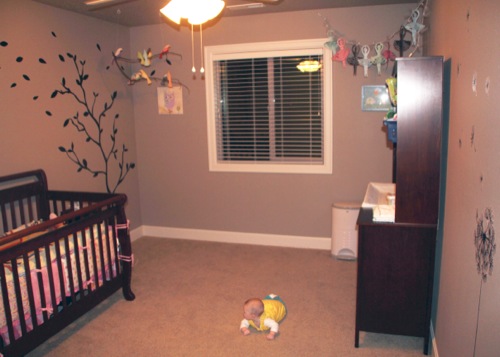 Taking in another perspective under the dandelions 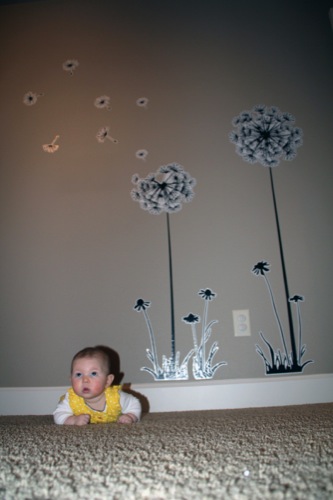 Her tree and birds 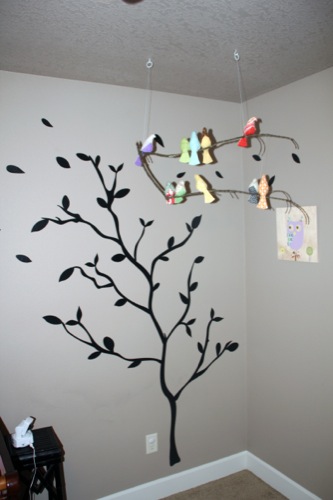 Auntie Libby made the birds 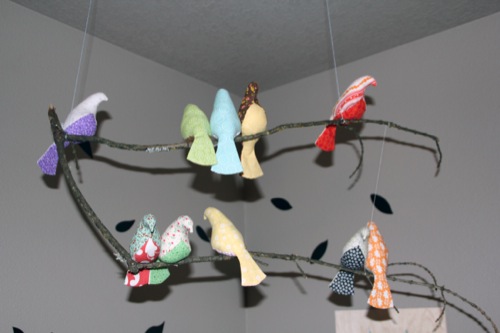 Jenny from Kitty’s work made this owl 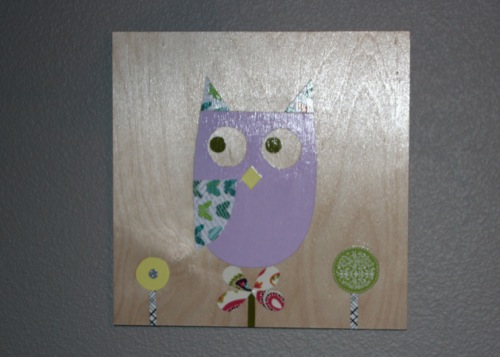 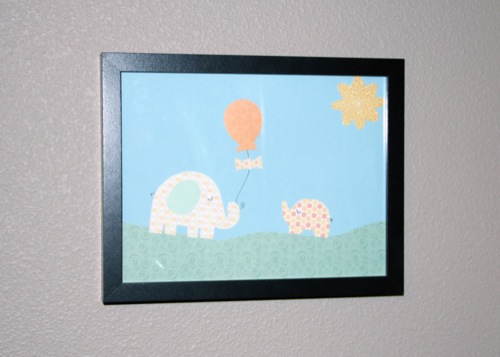 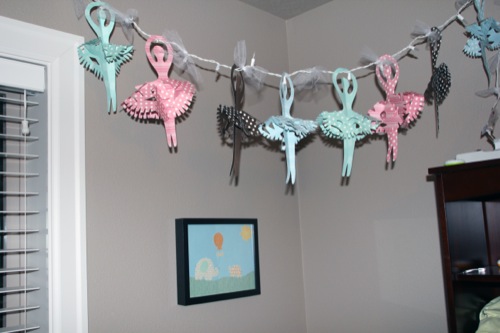 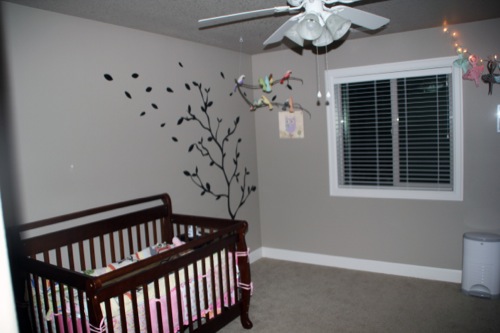 Luca was not left out.  He and I rolled to the Zoo today and kicked it with some homies. 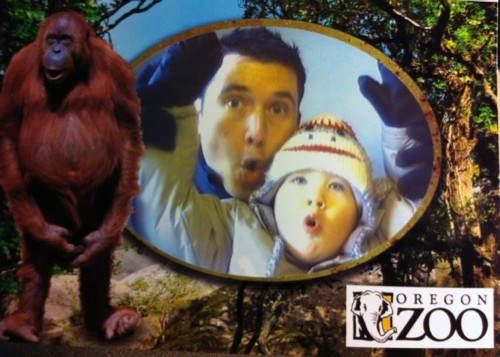 With holiday-time birthdays, Christmas, and New Year’s all the normal everyday chaos seems to be multiplied.  I try to stay organized with my checklists and my drive to maintain order in the universe, but sometimes it’s just futile and you have to let go and just go with it.  Of course that doesn’t stop me from reassembling Luca’s play-mat several times a day only to have him tear it apart in seconds as he passes by on his way to chew on a table or something more exciting.  I can’t say that Luca’s not teaching me as much about life as I try to teach him. 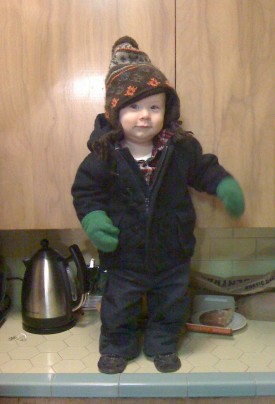 Luca took his first steps on Thanksgiving and is now walking all over the house. Pulling open drawers, relocating remotes, and giggling uncontrollably as he chases around his mom and dad seem to be some of his favorite things to do nowadays. He is a very active and physical little kid.  He’s gotten the hang of swim class and is now comfortably doing underwater swims.  Not to rush him but I’ve tried tossing a football, throwing a baseball, and shooting a basketball.  In most all cases instead of throwing, shooting, or tossing, the ball just gets chewed and drooled on. 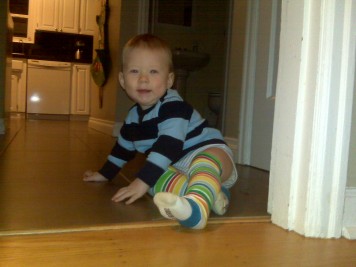 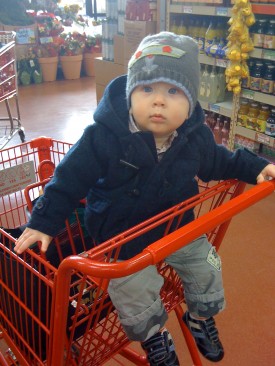 Ever since Kitty and I left Oregon almost 10 years ago various family members have been storing my 1970 Pontiac.  I bought the car back in High School after saving up over the summers painting for the school district.  I had many adventures and fun times in the Pontiac, but when Kitty and I left Oregon for Hawaii we couldn’t bring it with us.  First Kitty’s family stored it, then one of Barbie’s friends who owned a garage, then Barbie and Justin.  We appreciate everyone who helped out while we were away and took care of my car.  Once we returned to Oregon it was time to pick up the Pontiac.  Through some coordination and help I got it loaded up and drove it back to Portland.  Having been taken care of for so long it’s in great condition and runs as good as always.   I look forward to teaching Luca about cars and working on the Pontiac with him.  Hopefully when he is old enough he can have a few adventures of his own. Well…. we’ll have some long talks first. 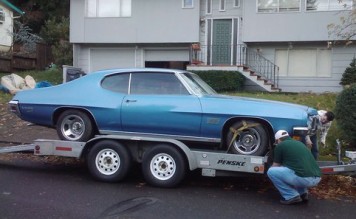 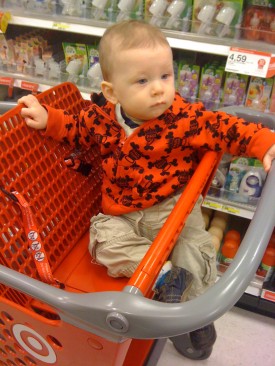 Aside from moving cars and trying to keep up with a now upright and mobile Luca we had some time to relax and enjoy Christmas with family.  It was Luca’s first Christmas and he had so much fun ripping open packages and chewing on bows.  Actually regardless of the gift the bow seemed to be Luca’s favorite part.  Luca was of course the star of the show and received many thoughtful and wonderful gifts that he will enjoy.  My gift to Luca was an antique model airplane mobile that now pivots and bobs from his bedroom ceiling.

Time for me to go check on Mr. Luca Lee and see how his nap time is going. 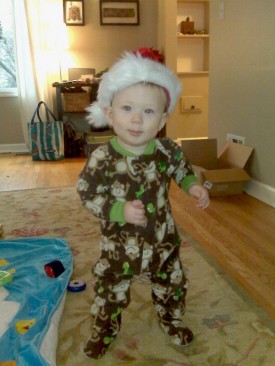 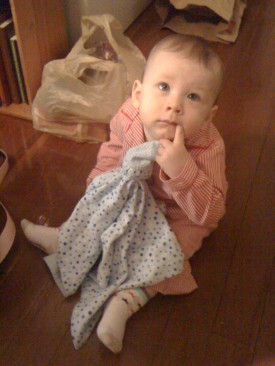 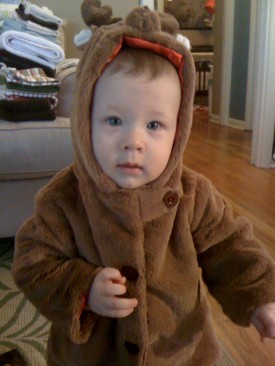 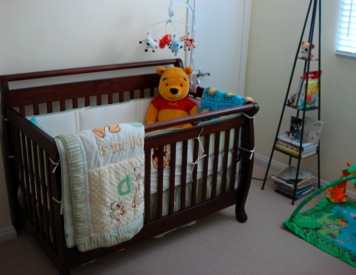 Happy New Year!! Kitty and I wrapped up the new year putting together baby furniture and finishing getting everything ready for Luca’s arrival.  I got pretty good at putting the crib together having to do it 3 times.  Yes, when you are assembling furniture that cannot fit through the doorway you should assemble it inside the room it’s going to go into.   The changing table was much smoother and, as you can see by the pictures, it’s likely because Kitty put it together.  Besides that we celebrated the new year watching the ball drop in NYC and enjoying the rose parade from the comfort of our home.  We went last year but decided to take it easy this time around.  Kitty is headed off to a brunch at Noriko’s as I prepare to cheer on the Ducks in the 2010 Rose Bowl.  It’s fun to see so many people with UO colors and signs on their cars rolling around Los Angeles.  However I have already received several messages and calls from local Angelenos expressing their concern.  I just told them to be sure to recycle and provide hugs to the hippies when asked. 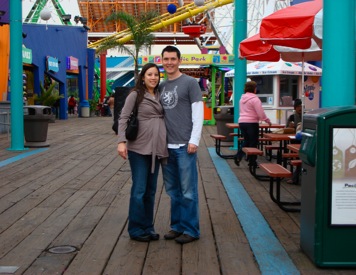 Since we were unable to travel to Oregon for Christmas my mom and Leo came down for a visit.  We had fun talking, sharing stories, dining, and seeing a few sights.  On Sunday we went out and did some baby shopping.  We are so appreciative of my mom’s gifts.  By the time she and Leo left we had a new crib, changing table, dresser and hutch, as well as a mattress and changing pad.  Later we headed over to the Santa Monica pier for the afternoon, where a tall naked man wearing only a loin cloth and wrapped in snakes was there to greet us.  Welcome to LA.  We walked through Old Town Pasadena at night and had fun sharing Pasadena, our home, and the life Kitty and I have made for ourselves. 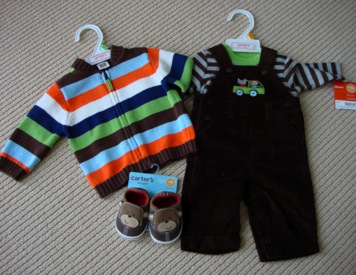 While the baby shower is fast approaching, some generous friends and family have already given us some baby gifts.  While my mom probably should be given her own section we’ve created a page to share some of the gifts.  Click Here to see some of the gifts.  Thank you to everyone for your thoughtful gifts and best wishes. 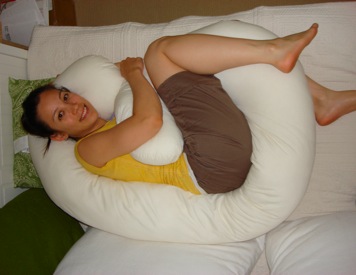 Having already been relegated to the far corners of the bed I solidified my position after purchasing the highly sought after snoogle.  Kitty was at a friend’s house enjoying a day at the pool, so along with a few other things I decided to do a little something extra.  After a long… long day of battling traffic, long lines, and armies of pregnant moms jockeying for position in the isles of the baby depot, I finally found and purchased the snoogle. The snoogle was quickly embraced and Kitty has found plenty of time to enjoy her new gift. 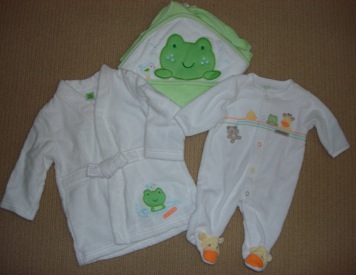 Amazingly within mere minutes of hearing her baby boy was having his own baby, Granny Franny leapt into action and had the baby’s first wardrobe bought, packaged, and shipped.  Complete with giraffes, froggie, and other friends the baby will no doubt be styling in its new onesie, robe, and hooded blanket.